He is an enthralling keynote speaker and conference chair, speaking on topics such as mental health, diversity, HR, equality, apprenticeships, plus much more (view his showreel below).

He provides professional mentoring for entrepreneurs, business owners, couples and young people amongst others.  He runs The Mentoring School and also their community for mentors.

The former teacher is known for his impact with turning round some of the most extreme behaviours and is consulted about adults and children around the globe.

His work with children alone is said to have personally influenced the lives of millions and works to help people understand the mental health spectrum. 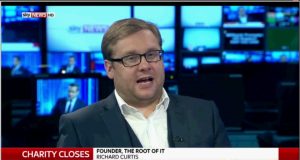 He has appeared on TV, radio and in newspapers talking about international news stories and is an experienced and entertaining speaker.  He has appeared on the BBC, ITV and Sky, in addition to filming four pilots for different TV series.  In print, Richard has been quoted in the Guardian, the Daily Mail, the Sun, the Mirror, the Observer, 7 Days in Dubai, as well as many magazines and websites. He was one of three experts brought in to develop the mental health and wellbeing curriculum guidance for every school in England.

Author of The  Social and Emotional Assessment, a tool to assess the social and emotional development of children, Richard’s work has had an impact in 5 continents.  He has written 11 books, including AWOL: the missing teenage brain and the impact on mental health, Gratitude at Home, Gratitude in Primary Schools, Gratitude in Secondary Schools and Higher Education, The Parent’s Guide to the Modern World, The Young Person’s Guide to the Modern World, 101 Tips for Parents, 101 More Tips for Parents and 101 Behaviour Tips for Parents; he has also co-authored Boosting Positive Mental Health in Teens with

Richard lives in Southampton with his girlfriend and their two children.

2014 Chair of the National SEND Awards

2014 The Root Of It awarded Best New Business Award

2012-18 Author of the Social, Emotional and Play Development Scale (known as the Curtis Scale)

2015 The Root Of It awarded Gold Scoot Headline Award

2016 Launch of The Mentoring School

2017 Start of PhD Psychology at University of Southampton

2017 Inducted into the European Alliance for Apprenticeships

2018 Co-author of The Gifted Introvert

2018 Member of the All Party Parliamentary Group for Mentoring

2018 Author of AWOL: the missing teenage brain and the impact on mental health

2019 Chair of the Mental Health and Wellbeing Awards